Kolkata, a city with numerous streets, and in almost every street, simple yet mouth-watering food that you can get at a very steep price. The foods found in these streets are so good that it is worth taking a trip to the city just to taste the food alone. From spicy and decadent puchkas to sweet and mouth-watering jalebis, we have got a list of 10 of the best foods that anyone should try t least once in their lives. These delicious treats are so easy to eat that we are sure that you will want to go back for again and again. 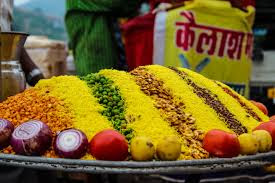 Samosa is one of the most popular street foods found in the streets of Kolkata. Samosa is a fried and stuffed food made of main potatoes, flour, and spices. The stuffing is prepared cooking and lightly mashing potatoes and a blend of spices to create a delicious filling. Sometimes peas, peanuts, caramelized onions, and other stuff are also added to the filling to make it even more delicious. The filling is then wrapped in a thin flour wrap in a triangular shape and then deep-fried. There are also a ton of other stuffing variations like pasta samosa and cheese samosa that can also be found in the streets of Kolkata. But no matter the filling, they are always delicious and everyone should try it at least once as street foods in Kolkata.

Phchkas can be found all around India and it is known by different names in different places of India. In Kolkata it is called phchka and boy, do they know how to make it right. This treat is made by rolling out small flour puchkas and frying them to make a small pocket that fits in the mouth. The pockets are filled with sour and spicy paani made from mint leaves and spicy potato and pea mash. The pani also contains tamarind which makes the pani very much delicious. There are a ton of variations in the panini, but the mint pani is the most common variation that can be found in almost any streets of Kolkata are the mint ones. They are so light and delicious that you can eat multiple of them in one go.

Dumplings are very popular in Asian countries and Kolkata’s streets have their own version of the popular dish. In Kolkata, these dumplings are called momo and they are served along with a hearty chicken bone soup that can just warm up your soul. Many in fact like momo for the soup that is served along with it. A tasty paste of tomatoes and spices called chatni is also served in many places which makes the whole dumpling experience is much better. Since the dumplings are mostly steamed you won’t be too feeling guilty for eating a couple too many.

The concept of jhal muri is incredibly simple, mix a bunch of ingredients that taste really good and make your mouth tingle a little bit, but since it is so tasty, you won’t mind at all. And they do it nowhere better than in the streets of Kolkata. The common ingredients in jhal muri are puffed rice or muri, chopped onions, chopped green chilies, and chopped tomatoes and many. The resulting mix of ingredients is crunchy, spicy, and perfect for light eating at any time of the day.

Jalebis are the favorite sweet treat of many all across India and why wouldn’t they be. This tasty dessert is loved by many because of the feeling that one gets when the crunchy and thin outer layer of the jalebi bursts in the mouth and the mouth is filled with the juicy sugar syrup that the jalebi is marinated in for hours. The dessert is really popular all across India and it is almost like a tradition to et jalebis during the time of Durga puja, a festival that Kolkata is famous for celebrating in the best way all across India. The spiral shape of the dessert is also something that makes the eating experience of this dessert much better.

Ghugni is delicious and it is made out of all healthy ingredients. It is made out of chana, peas, potato, onion, ginger, chilies, and spices, simple ingredients available in every Indian household. The resulting mix is both delicious and really comforting to your heart and your soul. It is basically a comfort food that we all have grown up eating. If you happen to live away from home, be it for work or for studies, the familiar taste will remind you of home.

Luci is flour tortillas fried in oil and aloo dum is a tasty potato curry that is popular breakfast food in many households in India. Many of us have grown up eating this almost every morning. But the ones sold at the street vendors of Kolkata taste especially delicious as they have figured out the way to use the correct blend of spices to give you the most satisfying mouth feel when you eat it. This street food is both delicious and it can fill your stomach at a steep price.

Bhelpuri as Street Foods in Kolkata

Bhelpuri is so popular not only in the streets of Kolkata but also in all over India that there are even Bollywood songs about this popular dish.  It is made out of puffed rice, diced tomatoes, boiled and chopped potatoes, and spices. What gives this dish a special taste is a tangy and delicious sauce made out of tamarind that makes this dish a crowd-pleaser. We are sure that if you try it once you are going to love it so much that you are going to want to learn the recipe so that you can make it at home and have it all the time.

Aloo chops are made out of one common ingredient, potato or aloo. The potatoes are boiled, mashed, and then blended with salt and spices. Then they are made into small oblong shapes and then fried in oil. These potato balls are filled with vegetables or sometimes eggs or chicken. Based on the type of fillings, they are also called chicken chop or egg chop. Everyone has their favorite variant and they can find them anywhere in the streets of Kolkata. They make a great side dish to a warm cup of tea. The crunchy outer layer and the fluffy inside make it this ball-shaped treat very tasty and easy to eat.

Chowmain is a noodle dish that can be interpreted as the Indian take on noodle dishes. The noodles are boiled and stir-fried along with vegetables and ketchup and soy sauce. Served with green or red chutneys, having a serving of this dish can fill you up for quite a while. If you love noodle dishes, you must try this dish, you won’t be disappointed. There are a lot of variations to this dish. You can find vegetarian chow main, made with noodles cabbage, carrots, and other vegetables. Or you can try the non-vegetarian version with meat or scrambled eggs.

These are just 10 of the foods that can be found around the streets of Kolkata that makes the city a giant treasure mine for anyone who loves exploring and eating. Whether you live in the city or just visiting it on a trip, you have to go for a food trip around the city, otherwise you would be missing out. The city has a lot to offer, the rich heritage and culture, the beautiful scenery, and the delightful people go ahead and try sitting in a chai shop, you are gonna meet at least one person with an interesting story to tell.