Here we going to talk about dangerous snakes. India is a land of varied biodiversity and geography. Thus India is often regarded as the nation of snakes and snake charmers as snakes are widely respected and appreciated here. One can easily find some astonishingly venomous snakes in the forests of India. As per the current report, more than 46,000 people die of snake bites every year, which accounts for more than half of the snake related deaths across the world. However, the major deaths are from fear of the venom itself. The topical area of India plays the best host to a huge variety of snakes. The whole country has more than 300 species of snakes which include at least 50 venomous varieties. The other non-poisonous snakes can create a panic reaction with local injury but they cannot usually kill a person.

Among all the dangerous and poisonous snakes in India, some are highly venomous which include the Common Krait, Saw Scaled Viper, Common cobra, and Russell’s viper. Researchers have found that their venom composition is widely different from any other species. Some of these venoms are highly neurotoxic and some are cytotoxins. Experts develop antivenoms by injecting a safer level of it into a horse, which has a higher tolerance to snake poison than humans. Horses then produce antibodies, which are collected and prepared into serums. The snakes’ toxicity depends on season, diet, geography and many other factors.

Here we have discussed some jaw-dropping venomous snakes of India: 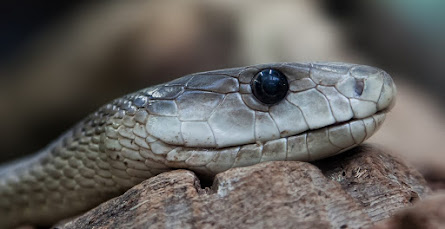 The Common Krait or Blue Krait or Indian Krait are locally known as Kaal Gandheraaj, Kaili and Marathi manyar. Its binomial name is Bungarus Caeruleus. Common Krait belongs to the family of “big four” species. It causes the maximum snake bite in India. Its average length is about 3 feet or .9 meter. But these often grow up to 5 feet 9 inches or 1.75 meters. The male Krait is much longer than the female one with longer tails. These snakes are also found in the Indian neighbouring countries like Nepal, Sri Lanka, Bangladesh and Pakistan. It has rounded snout with a depressed head, broader than its neck. Its upper lip is often yellowish or brownish. It has a preocular scale with white and yellowish patches. It has entirely black small eyes. So, their bite produces little pain and can cause death within four to eight hours of the bite.

The Indian cobra is also known as Binocellate Cobra or Asian Cobra. It belongs to the species of the Naja Naja. Indian Cobra is commonly found in the Indian subcontinent as well as in Nepal, Pakistan, Bangladesh, Bhutan and Sri Lanka. It is also a member of the big four species. Indian Cobra is mostly respected in Indian culture and mythology. It is often seen with the snake charmers. The genus of Indian Cobra was first described by the zoologist named Josephus Nicolaus Laurenti. This snake varies widely in pattern and colour. It is moderately sized and a heavy-bodied species. The ventral scales are brown, yellow, grey, and black whereas the Dorsal scales consists of colour patterns or hood marks. It can be of 6.5 feet in length. Their bites can cause cardiac arrest with paralyzing muscles.

Russell’s viper, whose binomial name is Daboia russelii is a venomous snake species that belongs to the Viperidae family. This species was named in honor of Scottish naturalist Patrick Russell. It is popularly known as Ghonas, Chandroborha, and Chandra-Boda in local languages. It carries lunar marks over its body. The famous folk story in India called Kangleipak is related to this snake. This particular venomous snake can be found in the whole Indian mainland. It has an average length of 100 centimeters and reaches up to 180 centimeters. The Russell’s viper is characterized with a triangular flattened head, small pointed keeled scales. Moreover, It also carries two triangular rounded spots on the top. This poisonous snake possesses two very long fangs and has an elliptical pupil.

Originally known as Echis belongs to the venomous viper’s genus. This is commonly known by the name of Carpet vipers or Saw-scaled vipers. This viper is found in the Indian subcontinent as well as in Africa, the Middle East, Pakistan, and Sri Lanka. One of their characteristic display is they produce a sizzling warm sound which seems like water on a hot pot. The Echis are comparatively smaller and can grow up to 80 cm. The saw-scaled vipers have a small, triangular, wide, and pear-shaped head with a keeled scale all over its body. They are mostly found in the dry and arid regions in India. Its venom consists of a toxin like cytotoxins, cardiotoxins, neurotoxins, and hemotoxins. Their bite causes blood to lose coagulation property and needs immediate medical attention.

Malabar pit viper, Rock viper, and Malabar rock pit viper are the common names of this venomous pit viper species. Its binomial name is Trimeresurus malabaricus. The deadly species is mainly found in the Western Ghats and south of Mahabaleshwar in India. It has a triangular head and smooth scales. Their eye has a vertical pupil. The heat-sensing pit is present in between the nostrils and eyes. They are available in various colors such as dark brown with black yellow spots, olive green. The patterns are in zigzag form all over its body. The tail is short and black at the tips. One can easily find them on the ground, in shrubs and stream beds. Its poison can cause swelling and moderate pains in humans.

The Hump-nosed Pit Viper is also known as Merrem’s hump-nosed viper or Oriental hump-nosed viper. Its binomial name is Hypnale hymnal. These particular venomous species grow up 45 centimeters in total. It has a stout body with a wide head. The name hump-nosed is given mainly due to its pointed and upward turned snout. The frontal shields are larger than those on the snouts. It is mostly greyish with brown mottling and overlaid with huge dark spots. These vipers are also found in Sri Lanka. These species are seen at night and early morning on the streamside. When this particular viper gets annoyed, it vibrates its tail. This cause the highest number of bite in a year in India and Sri Lanka. Their bites can cause renal failure and coagulopathy within few hours.

The venomous Yellow-lipped sea krait is also known by the name of the colubrine sea krait. These deadly species are found in the Indo-Pacific ocean waters. As the picture shows, it has a distinctive yellow snout, which extends up to each side of the head and has black stripes. It has also got a paddle-like tail which helps it to swim. Its binomial name is Laticauda Colubrina. The head is deep black and has lateral nostrils. This venomous snake is subcylindrical in shape and its belly is yellow. Its wide ventral scale stretches more than half of its body. This particular deadly species can grow up to 34.4 inches in male and 56 inches in females, which is comparatively larger than the male. The bite can cause flaccid paralysis, epileptic seizures and result in death.

Indian rock python common is known as black-tailed python, Asian rock python non-venomous but it can kill its prey squeezing it with its huge thick coils. Locally known as Ajgar are found in the Northern part and on the Deccan plateau of India and also in Sri Lanka and Pakistan. It usually grows up to 10.8 feet long & It has a triangular head broader than the neck. It carries a yellowish or whitish color pattern with a blotched pattern, which varies from dark brown to tan shades. They carry the heat-sensitive pits laterally on the snout. Its eyes have a vertical pupil. The body is covered with thick smooth scales. The ventral scales are narrow and the dorsal surface has blotches. Both males and females have a thorn-like structure on each side of the anal. It swallows its prey bigger than it as its jaw bone is not attached.

The venomous bamboo pit viper is also known by the name of Common green pit viper, Indian green pit viper. Another local name is boodro pam. Its binomial name is Trimeresurus gramineus and is found in the northeastern and southern parts of India. The upper portion of the body is bright green, greyish, purplish brown or rarely yellowish. However, it may often carry brown, reddish or brown spots in the body. This deadly species can grow up to 3.25 feet. According to its name, these species are seen in the forest and bamboo groves. It is characterized as nocturnal and arboreal. When annoyed it does not hesitate to bite. Therefore, The venom of a bamboo pit viper is neurotoxic and hemotoxic in nature.

This comes under the large group of coral snake. Sinomicrurus McClelland is its binomial name. It is found in the Northeastern part of India which includes Arunachal Pradesh, Darjeeling. These are also found in neighboring countries like Nepal, Thailand, Bangladesh, Vietnam, and Laos. The name is given to the famous naturalist and physician named to honor John McClelland. These are comparatively small in size and can grow up to 16 to 31 inches. The body is thin. The dorsal part is brown and reddish with black crossbars.  Their head is round, small with a broad white transverse band. Moreover, their venom carries neurotoxic venom that can easily kill a human being with symptoms like lips numbness, heart failure, and blurred vision.