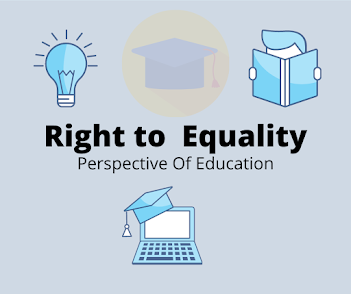 To survive in this world for any human being there is some primary needs as right to equality. So those basic needs are Air, Water, Food, Shelter and Clothing. Except Clothing, the rest are also the basic needs for any creature in this world. So where is the difference between humans and other creatures?

Actually, with the enhancement of human life from ape to present form of human being, not only the physical changes are there but also the thinking process has been changed a lot. And with food, dress, and shelter there are some more basic needs that have been added in our life. Those are Education, Health, and Communication. Among these extended basic needs education is the most important need in our life.

The structure of modern human life is based on mainly education. Enhancement of education is the only possibility to enhance the rest needs of our life. Education is such a wealth that is ever-growing by adding knowledge. Not only for personal improvement but also for social advancement, education is the most effective factor. Nowadays this is the only factor by which the future of a country or of an entire community can be decided. So, the practice and development in education is more important not only for the progression of personal knowledge but also to strong and secure the future of our society rather of our country.

From above, we all now have a clear perception of the importance of education. But now the most important question is that do we all have the equal rights in the perspective of education? The answer shall not be a one-liner. We have to know first what equal rights are. According to law we all are equal. And we all have the same rights to have equal protections and equal benefits without any discrimination based on race, color, origin, religion, gender, age, mental or physical disability.

All around the world in every country there is a constitution in which there is the statement of equal rights. We live in a democratic country, India. That means in Indian territory all persons are equal and everyone has the equal right before the law. In our constitution, seven fundamental rights have the most importance.

Those are as follows:

Right to Against Exploitation

Right to Freedom of Religion

So in these basic seven human rights in India, we are discussing the fifth right that is the Cultural and Educational Right. In our Constitution, Article 29 and 30 deals with a detailed description of cultural and educational right. This right guarantees us that everyone in India has an equal right in education and culture. Any community of religion, language, or minority can get equal importance in this sector of education and culture. Any religious, linguistic or minority community can preserve and develop their own script or can have an institution to ensure and improve their own belief and cultural practice. Every student can get their place according to their merit in any institution in India. There must not be any discrimination by their community. And most importantly the Government of India cannot discriminate against any institution based on the administrator belongs from a minority.

Benefits of this fifth fundamental right are very important to us:

Thus we all have the same rights to improve our merits; we can expect the same outputs also.

By this law, we have learned how to treat people without discriminate against anyone by their financial or social status from a very early age.

The society rather in broadway the country can get various merits from anyone and any a corner from our country.

The backward communities can get a similar chance as others, to enhance and equal progression of their culture.

The backward communities can also get the chance to educate their entire community by guiding their own way and can improve the practice of their mother tongue.

The most significant benefit of this law is to literate the whole community in any corner of our country.

Our Right to Equality

Besides these, we also have many more benefits and good effects for this fifth fundamental law in our Constitution. But, in this era of a fake civilization and false modernity, we all are trying to show off some fake equality rights every day. The curse of these falsifications the education and culture are not free at all. In education, there are very fine discriminations in our society. These discriminations are not announced. So these are actually cannot be found in normal views. No, I am not telling about the quota system which is conventional in India in every sector like education and job. The backward communities get priorities in some sectors according to our Constitution. That is announced and known by all of us.

As we know India is a developing country. So there is much discrimination according to their economic condition in our country. Many Indians cannot feed their families because of their small earnings. Not only that many of them have no shelter over their head. They don have money to prevent diseases by going to the doctor and purchasing medicines. So in their life education and culture is the most precious word which they cannot afford at all. In the side, there are many schools called ‘English Medium School’ that have grown up like fungus in our country. All of these schools are not Government aided and administered by such private groups of industries. Not only schools there are many institutions of professional skills; have started such a business by selling fake modernity. There are speaking in the mother tongue is a prohibited practice.

A huge amount of money they are taking from the guardian and treating them as a customer. The children are not being scolded here; they are getting spare from the authority. No, I am not telling that the authority or the teachers are guilty of doing such things. Actually the guilty is our mindset. According to us the foreign language is more important than our mother tongue, the lavish life hood is more important than the personal touch from teachers, and above all money makes us silent. Most of the rich people send their children to such private institutions for better infrastructure and better features. And the Government schools are going downwards by lack of students. There are also many talented and experienced teachers. But there are only a few children from a very ordinary family only.

There is also a better infrastructure but most of the guardian never visits those places because they have money to afford such private schools. They never even think about government schools or institutions. And obviously, the quota system also damages our education system. Many people from the rich backgrounds are using the quota facility because once they had the opportunity to use it. Maybe they were poor or from a backward community an early age. But now they don’t have the honesty not to take such a facility for the quota system. The results of such activities are as follows:

The needy backward people cannot even reach the right place. And surprisingly the Government is totally silent in this perspective.

The student of Government institutions has clearly neglected and humiliated by many of us. Because the students of such private institutions are more smart and presentable than them. No matter who has the better merits.

Before pointing to our Governments, we should have a look at what the Government has done to improve the education system in our country. There are many skim to literate people from the grass route level. There are many agencies aided by governments who help poor and backward people as well as children to continue their studies. There are many free welfare institutions getting financially helped by the government to teach the illiterate adult people for their own enhancement. The syllabus of primary and secondary studies has been changed many times for the better progression of study and to update the students by their primary lesion by the Government.

The evolutionary change in education has been done by taking a major step called ‘midday meal’. Those families who don’t have the ability to bear the expenses of study of their children’s Government and many Government agencies take the step to give them study material in free. But still it had been shown that many children did not come to school because they do not have food to feed themselves. So according to them going to school and studying is a luxury. In this situation to implement ‘Cultural and Educational Right’ Government has been taking a step to start a meal in school for all children come to school every day. Not only that there are also distributed the preliminary medicines to prevent some diseases. After taking this step the percentage of presence of students in the school have been increased.