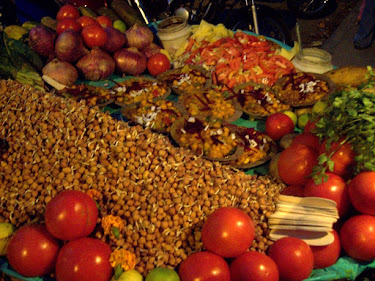 Unique 5 different snacks originated from Uttar Pradesh which makes your mouth full of water and easy to make:

To escape our small hunger we often resort to some small snacks. But we do not want to take too much time to escape this hunger and we want to finish it as soon as possible. And when this breakfast is a little fun, nobody’s an appetite to calm down quickly. Some special snacks from Uttar Pradesh that is made with different ingredients that are full of taste and easy to make. You must try these snacks once. This snack recipe will help you to whip up a delicious and great tasting in no time. So let’s know about some such snacks which are quite fun as well as tell the different food specialties of that city.

The most common evening snack is famous in Uttar Pradesh is Ghugni. It is also popular in Bihar, Jharkhand, West Bengal, Odisha too. Matar Ghugni is a snack. In Uttar Pradesh, people like to eat this snack with rice too. This is a snack made with very fewer ingredients, which is not only fun to eat but also healthy. It is made according to people’s tastes, but it is mostly plain and slightly spicy. Mostly, it is prepared with only green peas, garam masala, green chillies, mustard oil, Clovis of garlic, and salt are according to taste. But sometimes people add more vegetables and spices for their tongue taste in it.

It is a special dish that has a sweet taste. They are commonly made in Uttarakhand, Uttar Pradesh, Bihar, Punjab, and Odisa. This is a special festival dish that is also mostly used as a snack. It is a very simple dish made of wheat flour. Wheat flour solution is made by adding sugar or jaggery for a sweet taste. It is also eaten as a sweet dish. And it is also available in the market.

Ulta’s well-known name is Chilla. It is made up of Wheat Flour. Ulta is Crepe-like bread that is made up of wheat flour paste mixture. It is also sweet and salt flavored. But this is eaten only at a salt level. From this, plain can either be made with different ingredients like vegetables and spicy. Green chilies, ginger, and onions are used invariants. It is served with different chutneys.

This dish, made in Uttar Pradesh, is not as famous but it is wonderful in flavours. Like we love the flavour of pakodas during the rainy season. In the same way, this dish is very popular in the rainy and winter season here. But it is not compulsory to make it in only a particular season. This dish is made from Aarbi leaves. Aarbi leaves are wrapped in gram flour. Some sour like amchur and khatai are definitely used in it. It is fried in oil by adding salt and various spices. Sometimes people make juice of it and dip it and eat it with rice.

This dish is made by steaming rice flour and lentils or peas. People love this very much, it is tasty as well as healthy. Different spices are mixed in the lentils and it is wrapped in small dough of rice flour. And after steaming it is cooked and tasted with chutney. If you want to fry after steam, it makes the tasty look like street food due to which children also like a lot to eat.

Thus, this is the unique snacks which are originated from Uttar Pradesh and very less known by people. But once you have tasted its flavours, you too will become a fan of it and you will also add it to your snack list.